High on the High Street 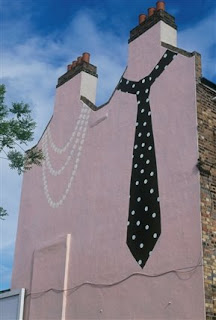 This post has been inspired by my one and only comment (so far!) which mentioned the arrival of those wonderful community enhancing chains we call costa coffee or starbucks, either you want them or you dread their possible arrival. I think the people of Deptford would be torn. I am dead against it and here is one reason why:

Deptford High Street is London's best place to shop, according to a mathematical formula devised for the Yellow Pages business directory. It reveals that it is the city's most diverse and vibrant high street. The formula, which defines High Street Diversity, is based on basics, choice, and mix, and takes into account the type of shops available. The south London high street beat more well-known places like Oxford Street and Kensington High Street.

Thank you the BBC. Basically Deptford High Street is great because there are hardly any chain shops/cafes. The ones we do have are pretty bloody poor. We have the glorious Percy Ingles, class in a cake. You will find other Percys in Lewisham, Peckham, Stratford and two around Whitechapel. You will not find a Percy on Kensington High Street. Our other chains are obviously Percy's biggest rival Gregg's and of course no impoverished South East/East London High Street would be complete without an Iceland and a Peacocks. There are however other chains past and present that have added a certain charm to the area; Goddard's and Manze's pie and mash shops and Kennedy's butchers. Real London innit. I think the main reason for this crazy formula working it's magic is the presence of the following:

A Singer sewing machine shop (why?)

The many Halal butchers

Housewives Cash and Carry (I know, I couldn't believe the name when I first read it)

A Vietnamese and Chinese food shop

Many pound shops that all sell exactly the same

An egg shop!! I think it sells oriental paintings too?

So that with a load of dodgy pubs, an arty cafe, nail parlours and some Chinese and Vietnamese restaurants amongst many I have left off I think we have a pretty diverse high street. Pair that with the market and we are going super-diverse!! 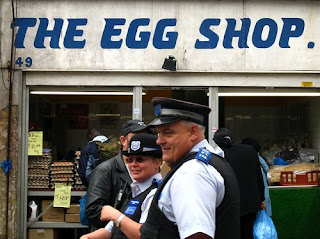 As my father pointed out to me recently when I was informing him of Princess Beatrice familiarising herself with nearby New Cross as a new student at Goldsmiths, Deptford has always been a royal slum. With it's proximity to Greenwich and the river maybe he is right but I shall be looking for for royal connections for my next post. If you have any let me know please.

A strong Russian royal connection if that counts: Peter the Great's visit to Deptford to learn about shipbuilding.

I'm glad I'm not the only one on whom the charms of our local bakery are wasted.

Its good to see people writing about Deptford. I like your writing style too. Keep it up!

Congratulations on the new blog, I'll add a link from Brockley Central.

hey, welcome to the Deptford blogging scene! Percys sells the best crumpets in the world - but only in the winter season, natch!

Btw the sewing machine shop is much appreciated by us local crafters, as is Peter & Joan's haberdashery.

Hi Knit nurse. You are right, the crumpets are thick and they rock. I've bought ribbon from Peter and Joan's before, can't believe how many different width sizes there are to choose from! I love the fact there is a singer shop, just never saw one before Deptford and is just one of those lovely little random things I love about the place. Probably not that random though what with all the creative types round here. Love your blog by the way. DG

Actually, just to continue the praise of Peter & Joan's, they have rarely failed to produce whatever I requested, from vacuum cleaner bags to a cartridge for my water filter, every type of lightbulb, cake decorating supplies and a washing line. Even if you can't see it on display, they probably sell it. Their range of yarn may be limited, but in every other respect - they rock! And as for Housewives... well the review on my blog says it all!!

Read that review. I tried to find some stir-in sauces for a stir fry once. Obviously went to Hanoi first. Nope, no Chinese stir-in sauces there, no seriously, not even the sachet ones I was after by blue dragon. However there was a diverse selection in House Wives. Do they use scanners there?

nah, it's your good old fashioned sticky labels and cash registers. Not quite as old as Arkwright's in Open All Hours, but not far off!

Hey! Whom so took that there picture of the Egg Shop?

You see that man glancing into the window holding the blue plastic carrier bag?

Sometimes I buy eggs from there to fry up in my restored motor narrow boat.