Deptford is the plaice to shop

I shall admit something terrible. On Saturday morning I arose (fairly early for me in fact) and one of my first thoughts was, "right, better get down to Lewisham to buy the ingredients for tonight's dinner." 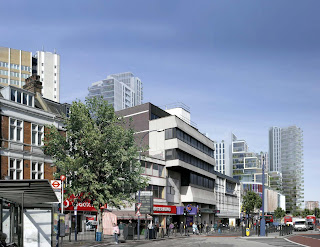 I voiced these thoughts out loud and was well and truly chastised. "Why Lewisham?!" It was exclaimed. "What can you buy there that you can't buy here?" Did I or did I not list all the reasons one should shop in Deptford in a previous post? Yet my first instinct was to jump ship to Lewisham. Was it the lure of the metal scoops/bowls of £1 veg? Boots? All those boutiques full to the brim with sartorial delights? Or even Argos? Why feel the need to venture further into zone 2 (almost 3)? Maybe the childhood memories of the rotating mechanical people above the lifts to the car park, I still remember the tune. Or climbing onto the camel's back in the play area (the sat down one of course, the other was for the athletic children, or the stupidly brave). Lewisham has more shops, the market is great for fruit and veg, the Italian Deli has too many varieties of linguine to mention and there's a TK Maxx. Reasons to travel surely. I sat down. I pondered. My mobile phone was expertly plucked from my mac pocket a few months ago in Lewisham, was I really ready to go back there? After promoting the virtues of Deptford High Street to anyone that cared to read why was I not about to practice what I preached? "I shall leave my Oyster Card at home" I declared and with dramatic lunge into my large reusable and recycled bag (so as to be ecologically friendly and all that) I brandished it and threw it rather accurately onto the coffee table. "Anything Lewisham does, Deptford can do better." I declared and threw open the front door. Admittedly I was going to look at DVDs in Lewisham but decided I'd put that off and buy some on Amazon later. Deptford did not disappoint. 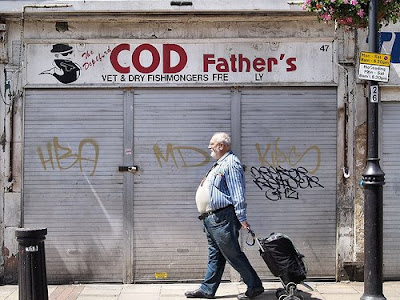 I had concerns that there would be certain things one could only purchase from a large supermarket, however the diverse products in Housewives Cash and Carry meant that I had a choice of two different sizes of bags of bay leaves. I went to Cod father's and bought two cod fillets, a fillet of smoked haddock and a handful of prawns. "We're a real shop love." Said the fishmonger while handing me a free bag of cooked mussels. Surely that would never have happened in Lewisham. When the grocer had no parsley I was directed to a shop that was likely to have it, and a huge bunch for 65p. Deptford High Street is what food shopping is all about. It was fun, productive and interesting. The only thing that would have made it better would have been passing Kennedy's and buying some chipolatas just because I could.

I'm not saying Deptford is better than Lewisham, they are obviously completely different but I really enjoyed searching for products and feeling part of my community and I felt strangely rewarded for it too. Oh and I didn't have to use my oyster card.
Posted by Deptford Girl at 11:49

Love the picture of Codfather's! My only disappointment about Deptford shops is the lack of good cheese and wine - but a trip to Greenwich usually does the trick. Deptford's other strengths more than make up for its failings, so much so that I rarely go to supermarkets these days!